Cam Newton is a true champion who went from from facing a felony to winning The Most Valuable Player Award and Offensive Player of the Year Award in the same Year. Cam Newton Double Dips in this year’s NFL Awards 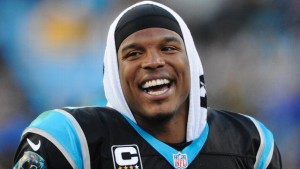 next level over the past 4 years, from winning the Rookie of the Year award in 2011, and making three consecutive playoff appearances.

These achievements, however, did not come without hardship. Cameron J. Newton began his collegiate football career as a second string Quarterback at the University of Florida in 2008 to the eventual Heisman Trophy Winner Tim Tebow. During his Freshman Year, Newton recorded three touchdowns from five completions. Cam Newton was the heir to the throne for Gator nation, but little did Newton know that the season he had at Florida was the “Cam” before the storm.

“I did things that I didn’t think about the repercussions.” said Newton referring to his Freshman Year at UF “I was facing a felony. . . Everything that I valued in my life was taken away.” as mentioned in the Under Armour series “Be humble or Be humbled.” Newton was arrested for purchasing a stolen laptop on the campus at UF. Cam was looked up to in his community after committing to Florida, however, shortly after his felony charges came to surface, he was quickly dethroned from being a hometown hero.

Newton spent two years playing football at a Junior College (Blinn), and although a high achievement for a football player, it was a humbling experience for the former top-notch recruit out of Atlanta, GA. Cam Newton was then largely bashed by the college football community. Having been Nicknamed “Scam Newton,” “Overrated,” and “A man with a folly” referring to his Defensive End frame. Despite his hardships, Cam Newton never gave up.

On a dim September evening at Jordan-Hare Stadium in Auburn, Alabama, Newton got a second chance for a dance with the most prestigious conference in college football. The SEC. (South Eastern Conference) 87,451 people were staring at the 6’5” athlete coming from a thorough media beating, ready to pounce on his every move. Little did that crowd know that the young man wearing the orange number 2 on his back that game would bring them back a National Championship with a side dish of a Heisman Trophy.

Cam Newton Broke the All-Time rushing yardage and touchdown record for a Quarterback in the NFL
previously owned by Steve Young in just 5 seasons, and he doesn’t appear have yet written his retirement speech. Cam Newton led the Carolina Panthers to a 15-1 season in the 2015-2016 season, and has a conference championship on the line on January 23rd.