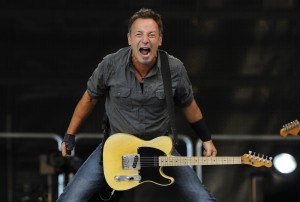 his love for Hip Hop music and was on record saying that he has the capability of finding kindred spirits in the world or Rap music.

To echo his sentiments, Bruce Springsteen went further to heap praises on the ever controversial hip hop star Kanye West praising his studio skills. Now Kanye can afford a smile since he has yet another old white rocker dude backing him.
Immediately after Kanye released Yeezus, the late Lou Reed was quoted extensively praising Kanye’s work on the album stating that nobody else was near doing what He (Kanye West) was doing. Now the huge rock-star the Boss himself Bruce Springsteen has given his praises to Kanye through an interview session he had with NRP.

During the interview, Bruce was asked whether he fancies listening to Hip Hop music and he was quick to add that he is a big fan of hip hop stars such as Biggie, 2Pac, Public Enemy, buy Kanye West is by far his favorite Hip Hop artist.
“Kanye West is Incredible” Bruce said. He went on to say how he watched Kanye on television doing his song “Blood On The Leaves” according to Bruce, Kanye’s performance was exhilarating and outright fantastic.
Ladies and Gentlemen; Bruce Springsteen finds Kanye Interesting!!!

To prove that he wasn’t just blubbering, Bruce Springsteen’s last album titled “Wrecking Ball” had in it a track that has a rap verse. He confessed that the verse was out of place and downright awkward, however, his heart was in the right place he said with a chuckle…

On his latest LP “High Hopes” Bruce went ahead to do a bit of sampling and looping and this is what led to the Hip Hop discussion during the NRP interview.
Bruce Springsteen stunned the NRP interviewing crew when he stated that Old-School Hip Hop was music that talked about what was happening in the streets as well as the inner cities where many people went through struggle.
This he said is something that he knew and did it in his own way by creating music of a different genre to talk about such issues.

Bruce also said that then Hip Hop was the music genre that came along and voiced out through a music style that was then considered as protest music context. His take on Old School Hip Hop being that it was done so beautifully.
As he talked more about Kanye West, Bruce Springsteen said that Kanye is incredible and the record making facility proves that he has put a lot of hours into it. NRP’s Interviewer (Ann Powers) was quick to point out that West and Springsteen have something in common; they are both reputed as notorious perfectionists.

Kanye West now has every reason to smile after the two well renowned and respected white musicians Okayed his musical prowess. Perhaps a collabo is in the making between these two….