Rock legend Jon Bon Jovi loves his soul food enough that he wants to share it with others and he’s not even going to charge too much to do it. 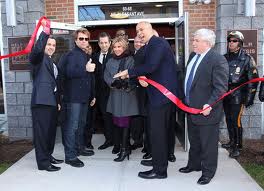 The JBJ Soul Foundation’s Soul Kitchen Community Restaurant had its grand opening on October 19 in Red Band NJ.  At the site of an old refurbished auto shop, Jovi was joined by local dignitaries and various representatives of other non-profit organizations.  The JBJ Soul Kitchen has been offering meals since 2009 using at least two different locations in the past but this new location will be a permanent.

The special thing about this restaurant is that it will not have prices on its menu, but instead, patrons can earn free meals with community volunteer work or pay with a donation.  The intention of this “pay-what –you-can” system is to encourage volunteer work in the area.  The concept is to give families with little or no resources’ an opportunity to earn a seat at the table for themselves and their families.  All that is required is community service or volunteer work in the kitchen.  Those that can afford to dine out are asked to contribute donations towards their meal that would go towards the community.  If you visit the website for the kitchen at www.jbjsoulkitchen.org, you will learn more about the kitchen, how to donate and view pictures in the gallery.

“At a time when 1 in 5 households are living at or below the poverty level, and at a time when 1 out of 6 Americans are food insecure, this is a restaurant whose time has come.  This is a place based on and built on community – by and for the community,” said Jon Bon Jovi.  He also revealed the décor stating “Picture the coolest brasserie in your hometown, that’s what this is.  It’s the hottest-looking restaurant in this town.  We have to get rid of a few stigmas attached to the word volunteering and making a difference.”

The Jon Bon Jovi Soul Foundation, founded in 2006, is a non-profit organization dedicated to bringing about positive change and helping the lives of those in need one soul at a time.  The foundations mission is that it exists to combat issues that force families and individuals into economic despair.   On the official website for the Foundation at www.jonbonjovisoulfoundation.org the organizations goal is to recognize and maximize the human potential in those affected by poverty and homelessness by offering assistance in establishing programs that provide food and affordable housing while supporting social services and job training programs.

From my standpoint, this is a good thing.  So many times we hear about the mistakes that celebrities make.  We see videos posted of the fights.  We hear of divorce and infidelity between Hollywood couples.  It is rare and quite refreshing that we hear of a celebrity using their star power for good.  With this endeavor and some of the other charitable work that was done through the Philadelphia Soul Arena Football (AFL), Bon Jovi has definitely added onto his legacy.  We can only hope that more of these types of kitchens start to pop up around troubled areas around America.