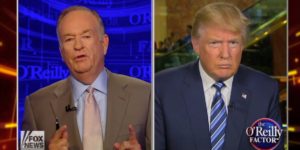 Bill O’Reilly made this comment after Donald Trump stopped by and made a guest appearance on the show to talk about his ability to boost employment rates for African Americans. Donald Trump went on to say “it’s an economic message” “if you look at Pres. Obama, he’s been a president for almost 8 years and with African-American you, you have a 59% unemployment. With people of prime age is much higher”.

Bill O’Reilly responded to Donald Trump’s statement by asking Donald Trump “are you going to get jobs to them when many of them are ill – educated, have tattoos on their foreheads. Bill O’Reilly later tweeted about the discussion with Donald Trump but failed to address racial comment. Bill O’Reilly tweeted “Donald Trump handled difficult questions tonight in a straightforward way. The elitists don’t like him but I don’t think they can stop him-B0’R.

O’Reilly is not a stranger when he comes to controversial racial statements and it is no surprise the race is usually a huge factor when it comes to him and Donald Trump’s appearances on his show. Bill O’Reilly is a huge Fox News reporter and has had many racial run-ins with African-American leaders and the now famous civil rights movement, black lives matter. Mr. O’Reilly is very unpopular in African American communities and the majority of all minority communities. Bill O’Reilly is a huge supporter of Donald Trump and they seem to have the same ideologies when it comes to race