Blue Ivy is the name of Beyoncé and Shawn’s little bundle of joy. Said to be named after Jay-Z’s album ‘Blue Print’ roman numerals IV which is four both Jay and Beyoncé’s favorite number. So 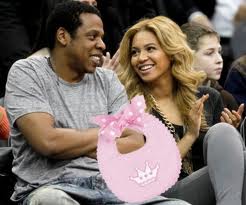 today on Facebook Beyoncé finally made an announcement about their little one. Her post said, “Hello Hello Baby Blue! We are happy to announce the arrival of our beautiful daughter, Blue Ivy Carter, born Saturday January 7, 2012. Her birth was emotional and extremely peaceful, we are in heaven. She was delivered naturally at a healthy 7lbs and it was the best experience of both of our lives. We are thankful to everyone for all your prayers, well wishes, love and support. Beyoncé & Jay-Z” Ok, I’m not trying to sound like a hater or anything. I actually like Beyoncé but I am just not a believer of the baby deal. I too have carried a child but I carried my child for nine months. So let me break down to you why I am not a believer. I’m usually one to not believe what they write on the internet, even though I myself am a writer, but there are too many unanswered question for Blue Ivy.

So in August of 2011 Beyoncé announced that she was pregnant. She said that she was about 3 months. “About” is the key word in that sentence. So now it is January. Let’s do the math. So that means B should be “about” 8 months. Now I know people can have children early but that early is not 100% healthy but premature. Hey maybe she lied about how far along she was, but why? Another thing is all the pictures that came up about the whole pregnancy thing. Some pictures no stomach and on the same day she has one. Then there is the stomach that flattened like a pancake. My stomach never went flat when I was 6 months pregnant. Just too many unanswered questions.

Now let’s get to the fact that they paid over 1 million dollars to take one whole floor of a hospital. That’s over the top to me. By them doing that they put out other pregnant women that where there also giving birth. One lady and her husband were asked to leave early because of Beyoncé and Jay. They gave birth to twins. That trumps one Blue baby. But I guess money trumps twins. I also heard that Jay was giving out Cd’s and tickets to his concert as parting gifts. WTF. That’s crazy! How about with all the money that they have they could have offered the families money for college for the little ones. But no Cd’s and tickets are way better. Then there is Jay’s new song featuring baby Blue.

Um so… Blue was born on Jan 7th and Jay released the song on Jan 9th.  So I guess Jay went to the studio that fast created a track mastered it released it in two days with the child’s voice. That’s over the top. Come on!!! This is so not reality. Who does that? Who takes over a hospital? I mean come on!!! I’m not a believer. I smell surrogate. I just can’t see B having a baby. Let’s see how fast her body bounces back. B is a black woman with weight loss issues, that she’s been dealing with over the years. But like I said I am not a believer. Great they had a baby. But if there is any false information about any of this the truth will come out. But at least the baby is healthy.