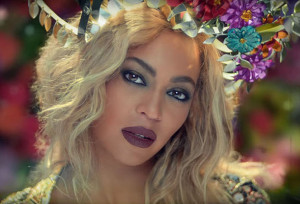 can also get a chance too check out the video which is very unique and has alot of subliminal messages. The Song starts off with Beyoncé saying “all haters are corny, with that Illuminati mess.”

The Video was set in a Louisiana setting around a lot of post-Katrina scenery mixed with a nostalgic black historical feel. In typical Beyoncé fashion this song is a club banger and should be an instant hit across the world. Strategically this is a great move because Beyoncé dropped the track the day before her scheduled performance at Super Bowl 50.

The new track Formation can be found on Tidal for free along with the new video. According too sources Bey promoted the new track heavily on the INSTOGRAM shortly before she released it. The video offers no shortage of dazzle and high-energy dancing.

Beyoncé has made a career of sending messages in her song. One of the messages that she did send was an image saying stop shooting killing us on a wall with her daughter Ivy blue smiling. Not only is this a hot track but is almost certain that this was a strong political statement.

Beyoncé is reportedly going to perform with Coldplay during Super Bowl 50. According to sources this Super Bowl performance will full of surprises and like nothing that we have never seen. Beyoncé also appeared in Coldplay’s latest song Hymn for the Weekend.

Bey is more than entertainer. She is definitely a smart business woman and the timing for this was excellent marketing. Super Bowl 50 is expected to draw the most viewers in the history of any NFL Super Bowl game. Bey once again is showing the world why she is the queen.