Beyoncé, Katy Perry, Lady Gaga and Kylie Minogue have a part of 100 songs banned in China. So sad. Overseas money is the best money. 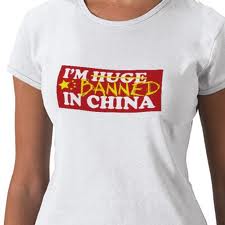 The United States is so opinionated and picky that it only allows certain artists to make it here. So a lot of artists venture out of the states to make aliving, where the music is more appreciated. Well Katy Perry’s song “Last Friday Night (T.G.I.F) was said to be offensive because there was talks of ménage-a-trios, skinny dipping and being drunk. I keep saying these songs are getting out of hand.

Too many children listen to the songs and think its ok. Kylie Minogue talks about orgies in her song “All The Lovers” and her song “Get Out My Way” was banned. Lady Gaga had six songs banned off her “Born This Way” album. Side Bar… Born what way? A man? Okay I’m being bad. Anyway, one of the songs banned was “Judas”, but her gay lesbian song title track was not banned. Also banned was “Hair, Marry The Night, Americano and Bloody Mary.” Blood Mary? What kind of title is that? I have to go listen to that. Then again I don’t even care. She is too strange. But I hear Lady Gaga is trying to tame down her style to get a normal audience. That won’t happen. It’s not the image; it’s the crazy music that she needs to change. Beyoncé’s song “Who Run The World” was banned.

I am cracking up right now as I type this. I guess because China doesn’t want their women to have a mind of their own and gain some power. They oppress their women more than some Muslims. No offense intended but it’s true. Isn’t China the county that don’t want the woman to give birth to females and they are only allowed to have one child and if they have a girl most of them get sent to homes? Crazy, so Who Run China? Boys! So that’s why they banned Beyoncé song. They also banned Bruno Mars’s song “Grenade” and “Just The Way You Are”. I am surprised they didn’t ban “The Lazy Song”. I love that song. Those songs are all considered offensive. Some of them are but what’s really offensive is China’s treatment of their women. Without a woman you cannot give birth to a MAN…

Vyzion Internet Radio spins worldwide and national Dj mixes 24/7. So the party never stops! From the car the office the gym or your home you can listen to Vyzion radio anywhere. We offer free IPhone and Droid Apps Contact us at 1-800-957-9650.