Brandon Alexander Howard known in the world of music as “B.Howard” was born and raised in Los Angeles California. Throughout the years he would bounce back and forth between L.A. and Chicago. B.Howard is the oldest of three 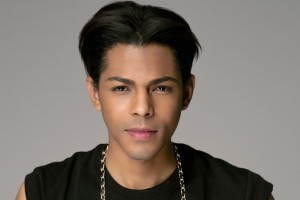 children from the successful singer, song writer Miki Howard. successful singer-songwriter. Miki Howard was managed by Joe Jackson (who is the father of Michael Jackson) in the 80’s with was the beginning of a long relationship with the Jackson family. Brandon was actually raised at Hayvenhurst the Jacksons’ family home. B.Howard has often been compared to the late great Michael Jackson by his singing ability, look and style of performance.

B.Howard is an amazing entertainer in his own right and definitely blazing his own path in the music industry. Brandons’ debut album “Geninsis” was released in 2010 with a breakout single off of that project called “Super Model” which was followed by another single from the album called “Dancefloor”. The single “Dancefloor” had an amazing Video that introduced him to the world as an artist to watch. Also in 2010 B. Howard collaborated with Wyclef and Jazmine Sullivan for the song “Kenako” which is a tribute to the beloved Nelson Mandela. Brandon is good friends with Artist Akon and Akon is delivering a promise to B.Howard that he would deliver hits to him on his future work. B. Howard also has song writing and production credits with artist like Genuwine, Latoya Jackson, Jason Derulo, Miguel, Ciara, Neyo, Teddy Riley, Omarion, Trey Songz, Marques Huston and more.

In B.Howards’ exclusive interview with Dj Capitol K for “The ReCAP” Vyzion radio “On Demand” he discussed his past works and also his plans for the future. B.Howard has a new single “Don’t Say You Love Me+” that at the time of the interview for “The ReCAP” was at #14 and is currently rising on the Billboard Magazines Dance Charts. “Dj Capitol K says “I really enjoyed this interview. B.Howard has an a great spirit, great sense of humor and is very down to earth. I wish him success in his career. It was a pleasure to speak with him”. Make sure that you Download the free APP for Vyzion Radio available for Android and iPhone and Check out the “The ReCAP” “On Demand” with Dj Capitol K with his detailed discussion with the amazing B. Howard. “The ReCAP” is set to relaunch on February 1st 2016 and you will not want to miss this interview.