Afroman went on record to apologize for punching a female fan. According to Afroman he loves his fans and he wants to apologize. 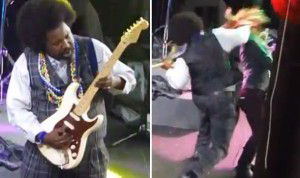 walk a half a mile to get to the place. Afroman stated that he just had a lot of frustrations. According to Afroman there was a guy on the side of the stage yelling obscenities and there were some girls that got up on stage and he tried to keep performing with the distractions. As he was playing he thought it was the guy that was on the stage heckling him. Afroman stated that he felt the female and he thought it was the guy and that was the reason he responded the way that he did. Afroman ‘s final response when asked what did he think about his actions his response was that he was wrong.

Afroman’s actions went viral across all social media platforms. Millions of fans across the globe were shocked at the punch that Afroman threw at the small female fan. Afroman has had a long career of being loved by all of his fans in all genres of music. The main consensus of most of the fans across the world is that this was totally uncalled for and many made it clear that Afroman should be arrested and charged for assaulting the female fan. Frustration or not it is very clear that this was totally uncalled for and very unprofessional for a man of Afroman’s stature and size. The clearly looks like she was barely 110 pounds Afroman looks like he could easily weigh in at 300 pounds.

Police were called to the scene and arrested the entertainer, whose real name is Joseph Edgar Foreman. He was booked on an assault charge and released on a $330 bond, according to reports.