Adele is back after almost 3 years when she returned with her new hot single Hello.  Adele released a beautiful six minute tear jerking music video.  The hello video was directed by French- 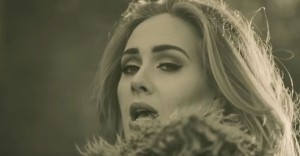 Canadian filmmaker Xavier Dolan a.k.a. mommy and executive producer Janie McInnes.  Also in the video was Tristan Wilds a spectacular young actor starred in the series the wire.

The Adele Hello video is simply brilliant.  Her voice is as beautiful as ever.  What makes this video really special is the 1980s feel with the black and white production.  If your old enough it will almost remind you of Cindy Lauper’s Time after Time.  The vocals are perfect,  the content is perfect and the video production was simple yet masterful enough to simply take your heart and breath away.

Within one day the video has already received over 10 million views.  Adele has already taken over the charts as number 1 on ITune’s and is the top US trending topic on Twitter.  It is safe to say that Adele is a powerhouse when it comes to American music lovers.  One might ask why is Adele so good?  It’s simple.  She makes great music with good content that people can relate too and that is something totally rare with the younger artists that are coming out these days. Adele is special because she doesn’t have to get half naked her vocals sell her talent.

Hello is Adele’s first new song released on her new album and the fans cant wait to hear the rest of it.  If Hello is this great you can expect for Adele to completely take over in for the rest of 2015 and 2016.  This new track Hello from a Adele gets a VssssUp from all of the Vyzion Radio DJs.  This track will be spending so make sure you’s to an end of Vyzion Radio 24 seven Adele will be that featured artist.  Can you say HELLO