At the age of 42, Marcy Borders, the woman featured in one of the most iconic 9/11 photos has died of stomach cancer.

In that picture taken right before the south tower of the 9/11 World Trade Center collapse, Marcy Borders was the 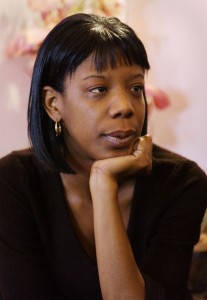 businesswoman covered in dust from head to toe captured on film.

Borders family announced Monday, that she succumbed to stomach cancer. She was diagnosed last August and had been undergoing treatments, NJ.com reported.

Borders was only employed with Bank of America for one month in 2001 before 9/11. After the attacks on America, NJ.com reported that she fell into a decade-long depression that led to alcohol and drug abuse. In 2011 Borders went to rehab and had been clean since, NJ.com reported.

After doctors found that she was battling cancer, she suggested in interviews that it was caused by exposure to chemical pollutants during the World Trade Center collapse, AFP reported. 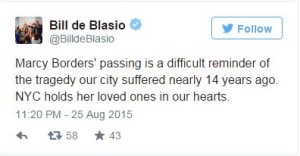